On Christmas Eve last year, after I said goodbye to my five children and husband as they headed out the door to go see my in-laws, I did something that moms everywhere have dreamed about for centuries:

I spent the evening cuddled up on my couch watching cheesy Hallmark Christmas movies and drinking hot chocolate. Completely alone.

Yes, it’s true. I really did that, and it was both as wonderful and equally as sad as you are imagining. The truth is, I was sick last year over the holidays. It’s a long story, but a month-long sickness that was more than likely the `rona, according to my doctors, left me weak and exhausted come Christmas Eve, so I elected to stay home. (And for the record, I wasn’t sending potentially infectious children out in the world either, there were multiple negative COVID tests involved, trust me on that one.)

My Christmas Eve last year was different than anything I had ever experienced as a mom of five young kids, and if you’d like to hear my dirty little secret, it’s this: there was a part of me that downright relished not having to lift a darn finger.

In fact, I’d be lying if I said that I didn’t find some relief in skipping right over the holiday festivities last year. Like many moms, I love the holidays, but I also find them to be so incredibly stressful. There’s always so much to do, and I loathe shopping and am terrible at wrapping. And it seems like my children live for nothing more than changing their lists last-minute and causing me to feel terribly guilty that Santa, once again, “ran out” of certain presents.

There was a huge difference in how I approached the holidays last year, knowing no expectations were on me and that my Christmas Eve wouldn’t be spent staying up late at a family gathering, then hauling eight tons of presents home while herding exhausted, over-sugared and over-excited kids into bed, and then, at one a.m., starting to create our own family’s Christmas “magic,” only to be awakened, bleary-eyed and exhausted, at five a.m.

For the first time in my life as a parent, Christmas Eve was spent completely stress-free. I waved my husband and kids out the door to Mass and annual dinner at the in-laws, and plopped myself back on the couch for a holiday movie marathon. And sure, I missed them and was a teensy bit sad, but on the other hand, it was awesome. I was so tired from the illness that I couldn’t even imagine moving off that couch. Giving myself permission to opt out really allowed me to regain strength over the next few weeks. I knew that my couch Christmas was a once-in-a-lifetime event (well, hopefully) and I tried to just take it for the break that it was.

This year, however, everything is completely different. I somehow started feel behind on the holidays back in October, as many moms I know dutifully completed their holiday shopping amidst warnings of toy shortages and shipping delays.

As I started adding things to my cart and asking my kids to make their Christmas lists, it all felt just a little sad and exhausting. It felt like the magic of the holidays has already been completely snuffed out. Heck, the fact that I started stressing about Christmas way back before Halloween made me think that an evening spent on my couch again this year would be far superior.

But even though the stress of the holidays can seem to override the magic of the season, last year taught me something important: the holiday season is so much more than celebrating on just one particular day. It doesn’t have to be limited to just the shopping, or the Christmas Eve celebration, or even Christmas Day itself. For many families, mine included, other obligations and responsibilities might make how we celebrate those days feel like they’re almost out of our control.

So instead of focusing on the ways and days that seem stressful to me, this year, I will be putting my time and energy into making the season magical in the ways I can control.

For me, that means cheesy Hallmark movie marathons with my daughters; it means annual gingerbread house competition with tons of frosting and all the candy toppings we can find; it means blasting holiday music and decorating the house together as early as we want, even when my husband rolls his eyes, it means dancing in the kitchen to Christmas music; it means endless hot chocolates and reading together in front of the fire.

It means the many, many different moments over the whole course of the holidays, not just one frantic, frenzied dash to Christmas morning. Because, for me, that’s where the magic actually can be found.

Even if a little part of me would rather find me on the couch watching a Hallmark movie. Ahem. 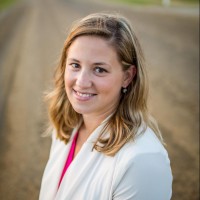 Chaunie is a mom of five and a labor and delivery nurse turned writer and editor. Her work has appeared everywhere from The New York Times to Glamour to Parents magazine. Chaunie lives on a small farm with her woodworking husband and kids, which could make her like Joanna Gaines, except she can’t cook, kills every houseplant she brings home, and sadly, does not have beautiful, flowing long locks.

« Playlist: Your Pre-Holiday Pep Talks From Meagan & Sarah
It’s The Most Hard-On-Ourselves Time Of The Year: Episode 344 »

Let’s talk about the weather - you know it’s o

You've checked all the apps, read the books, liste

A few thoughts on setting ourselves up for success

Still thinking about this one from a couple of wee

This selfie was taken on New Year's Eve, when my b

Does anyone else feel like we're trying to juggle

Oops! If you clicked play on this morning's MTM an

Let’s talk about the weather - you know it’s o

You've checked all the apps, read the books, liste

A few thoughts on setting ourselves up for success

Still thinking about this one from a couple of wee

This selfie was taken on New Year's Eve, when my b

Does anyone else feel like we're trying to juggle