For most of my life, Halloween has been one of my absolute favorite holidays. I even loved it when I was teaching middle school, which, if you’ve ever had to teach grammar to 35 sugared-up 12-year-olds in inflatable dinosaur costumes, you might understand to be quite an impressive feat.

And as this most festive time of the year fast approaches, I can’t help but reflect on last year’s first pandemic Halloween, and the ways in which it served as a testament to the relentlessly joy-inducing power of a spooky season. It also serves as a reminder that light and levity (or a good case of the screamies) can be found even in the darkest of times.

In the fall of 2020, I think I was far from the only Halloween-loving adult who was really craving some costumes, candy, and a more controlled kind of terror in my life. However, by late September, my already pandemic-weary heart was forced to accept that any semblance of a “normal” Halloween was likely impossible. Parades were cancelled, fairs were postponed, and haunted houses everywhere shut their creaky doors to the world.

But when the rumors of cancelled trick-or-treating started floating around, my neighbors put their collective foot down. I think that many of us recognized just how few opportunities children get to consume an entire pillowcase full of snickers bars in a single night, and we were determined to keep this one sacred and safe.

So, my neighborhood banded together and showed up for the kids (and, if I’m being honest, for us Halloween-loving adults, as well).

At the beginning of October, what my family had come to affectionately refer to as our daily “prison walks” around the neighborhood were suddenly (and very much to our delight) transformed by a deluge of spooky decorations unlike anything I had ever seen before. It was as if all of the neighbors had been waiting six months for a Covid-safe reason to leave their homes and spend entire afternoons on their front lawns. And if that opportunity had to involve hanging life-sized spiders from their garage roofs, so be it.

Throughout the month, I spoke to many of my neighbors (or, more accurately, screamed from a safe distance) about their projects and was delighted to find that so many of them had turned some pretty unhappy situations into a once-in-a-lifetime opportunity to really lean in to Halloween.

The guy down the street who got furloughed from his pilot job? He built a socially distanced corn maze in his front yard. The twins who got sent home from college when their campus went remote? They decorated their dad’s van like Scooby Doo’s Mystery Machine. The retired teacher with the chronic health conditions who no one had seen in months? She collected POUNDS of trash from the beach and used it to construct an enormous (and obviously haunted) sunken ship in her garden bed.

For weeks, the daily jaunts we had grown so tired of suddenly became the highlight of our morning (and afternoon, and evening). We were shocked, impressed, and oftentimes scared silly by the veritable Halloweentown that had been constructed in our own backyard. In fact, almost a year later, my young daughter STILL talks about the sensor-operated robotic “spooky girls” my teenage neighbor made out of a Bluetooth speaker, two mannequins on wheels, and some dresses that were oddly reminiscent of a nightgown I, myself, owned in childhood.

But as much fun as the preparations were, they paled in comparison to the main event. On the night of Halloween, bridge tables were erected at the ends of driveways, candy was laid out in socially distanced fashion, and children and adults alike were encouraged to wear masks (which ended up not being that big of a deal, considering so many of us were planning on going as a Power Ranger, or Spider Man, or the Creature From The Black Lagoon).

And, to my utmost delight, the occupants of many a two-story home or apartment used everything from pool noodles to PVC pipe to an inflatable slip-n-slide, to construct elaborate candy chutes that launched Starbursts, Twizzlers, Skittles (and the occasional clementine) straight into the open arms of the children waiting on the sidewalk below.

This year, as we approach another sacred Halloween season, and the pandemic we all hoped would be over by now continues on, I am buoyed by the knowledge that we’ve at least figured some things out:

This year, we have better testing, and vaccines, and we know how to install elaborate pulley systems on our roofs for the purpose of making inflatable severed heads dance just out of reach of groups of squealing children.

This year, we have emergency childcare plans, and more realistic expectations for the school year, and a catapult made of plastic skeleton bones for launching marshmallows across the street.

This year, we have fear and uncertainty, but we also have perspective, and the knowledge that joy can still flourish, even in the scariest of times (and yes, I’m referring to both the virus and the ghosts).

This Halloween, my daughter, who has really doubled down on her princess obsession, will be dressing as Snow White. My son, for reasons unknown, has decided to go as Donald Duck. And my husband, myself, and the baby, in a form of subservience characteristic of many parents and infants at this time of year, will be going as Mickey, Minnie, and Pluto.

And much like last year, we didn’t wait around to get started. The princess costume was delivered at the beginning of September, and Donald Duck arrived a few days later. The spiderwebs were ordered in August, and the orange twinkle lights came out of hibernation before the kids even went back to school. And, much like last year, the desire to escape to the world of our imaginations is strong, but so is the desire to bring joy, laughter, and a slightly scary surprise or two into the lives of our kids, and our neighbors.

The world is definitely different, and, in a lot of ways, worse, than it was in 2019, but my community’s effort to save Halloween is just one of the millions of ways we have showed up for one another over the past two years.

And the joy and excitement on my children’s faces as they practice using their dinosaur claw grabbers to snatch candy out of our inflatable swimming pool is one example of the many magic moments we’ll continue to have together, despite the harsh realities going on around us.

So, this Halloween, I encourage you to resist the urge to wallow in the what-could-have-beens of it all, and make the best of what you have–because even in the scariest and most uncertain of times, a motion-activated skeleton by the front door, or a severed rubber arm in the mulch pit, or a king-sized Twix bar lowered from a rooftop on a fishing pole is sure to make you smile.

Katherine is a stay-at-home-mom to three kids. She and her husband are originally from the Midwest but now reside in sunny, Southern California. Before taking time off last year, she spent 10 years teaching middle school English in public and charter schools throughout the Los Angeles area. She has a passion for literature (of both the children and adult varieties) which she shares on her personal blog, The Paper Dart. 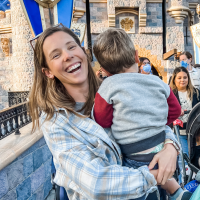 Katherine is a stay-at-home-mom to three kids. She and her husband are originally from the Midwest but now reside in sunny, Southern California. Before taking time off last year, she spent 10 years teaching middle school English in public and charter schools throughout the Los Angeles area. She has a passion for literature (of both the children and adult varieties) which she shares on her personal blog, The Paper Dart.

« A Week Of Real-Life Dinners: Episode 336
Obsolete Life Skills Our Kids Will Never Learn (And New Ones We Never Had To!): Episode 337 »