Before I got married, I don’t remember putting much thought into cooking. I spent my early 20s with roommates, and we often took turns cooking. And like a lot of single people, we took advantage of Happy Hours and appetizers and dinner at the newest restaurant downtown. Fast forward to the end of my 20s, I found myself married to a farmer and living an hour from the closest grocery store. Stopping by the store on my way home from work to pick up a few things to make dinner, grabbing take-out, or ordering pizza was no longer an option.

Early on, I wasn’t great at grocery shopping for this lifestyle, and I often made multiple trips to the store each week. It wasn’t very efficient and cost a lot more than the once-a-week shopping I do now. Over time, I’ve grown to enjoy cooking meals for my family of five and our crew (often a dozen people!) during the busy seasons. But it’s taken planning and adjusting.

Moving to the middle of nowhere wasn’t something I could prepare for, and I had to learn these skills through trial and error. Many of you will likely never live this far from town, but if you stick with me, I’ve rounded up a few things I’ve learned about cooking while living so far from the nearest grocery store—and it can save you time, money, and maybe most importantly, your sanity.

In the beginning, I didn’t deviate much from a handful of meals I knew how to make: tacos, spaghetti, a casserole or two, and frozen pizza. Over the years, I’ve enjoyed trying more challenging recipes and adding more meals to my weekly rotation. But that took time.

There were also the seasons when I had a newborn, and spending a lot of time cooking wasn’t in the cards. Quick dinners and freezer meals are my go-to in those times.

Find what works best for you, and don’t compare your cooking to anyone else.

I cannot stress enough how much meal planning each week has changed my approach to cooking and how I feel about it. Because we are so far from town, I can’t just grab a few things on a Tuesday at five at the store and whip up dinner. I have to plan ahead. Each Sunday, I grab my meal planner and come up with a few meals for the week. I look at my calendar to see if there are any nights when we won’t be home, or it will be a late night (I plan for leftovers or a meal in the crockpot on those evenings). Knowing what I’m going to make throughout the week makes for more efficient grocery shopping and takes some of the stress out of “It’s 5 o’clock, and I have no idea what we’re going to have, and everyone is starving!” (But I would be lying if I said this still doesn’t happen sometimes.)

Stock Up On Canned Goods

I’m lucky enough to have a decent-sized pantry, and I always make sure it’s well-stocked with non-perishables I regularly use. For me, that’s diced tomatoes, tomato sauce, canned vegetables, kidney beans, cream of mushroom soup, etc. Of course, I love having fresh vegetables and fruit in the fridge, but those don’t last forever. (And this is when meal planning pays off—using the cilantro when I plan to, so it doesn’t die a sad death in the crisper drawer.)

Leftovers get a bad rap, and with good reason—some meals are not great the second time around. But, less food waste (yay!) and not having to cook (double yay!) are a couple of the reasons I love having leftovers. And it doesn’t always have to look the same the next day. When I make pulled pork, we usually eat pulled pork sandwiches twice (either the next day or two days later). And I’ll make pulled pork nachos to finish off the leftover meat.

Don’t get me wrong, Pinterest is great, and I use it a lot. Especially on nights when I didn’t meal plan or the plan went by the wayside, and I find myself Googling “What to make with ground beef that isn’t tacos or spaghetti.” However, there’s something about having a physical cookbook to flip through that makes cooking feel a bit more special—like I’m a grown-up. And I find it’s much easier to cook off a physical page than a screen. Get the cookbook that fits your current lifestyle. For me, that’s relatively simple meals—you won’t find me cooking a five-course meal that takes all day.

On the flip side of buying a cookbook, print your favorite recipes from Pinterest and put them in a three-ring binder. It doesn’t have to be pretty or fancy, but it’s handy to have my favorite recipes right there instead of trying to find them on the Internet. (And scrolling past all the ads to get to the recipe.) Ask the people in your life whose food you like for their favorite recipes, and keep them in your binder or a recipe box.

This last one might seem simple, but trust me, this is a game-changer. I have nothing against jarred pasta sauce, but homemade is much better. And it’s not as complicated as I thought it would be! (Not to brag, but I always get compliments on my spaghetti sauce.) As long as my pantry is stocked, I usually have the ingredients to make spaghetti—even if I haven’t been to the store in a while.

Even if you live just around the corner from a grocery store, cooking can be stressful. Take one or two of my tips and see what happens! (Just don’t tell me about the nights you call and order take-out, I’ll be a little jealous.) 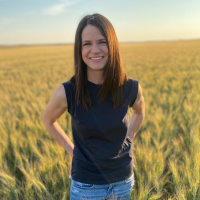 Stacy Bronec is a wife, mom of three, lover of cake, and writer. She and her husband farm and ranch in the middle of nowhere Montana. In her previous life, she was a high school counselor. Now, when she’s not taking meals to the field or cleaning grain from the dryer vent, she’s doing spin classes in her basement, reading, or writing stories to make sense of the beauty and challenges of rural life. You can find her on her website, stacybronec.com.