Well, here we are. For most of us in North America (hello to those of you around the world!), we’re coming up on six months since the first run on toilet paper. Half a year since crowded school assemblies, busloads of rowdy children, movies in the theater, date night in a cozy restaurant. And while the phrase “new normal” brought so many eyerolls back in the spring, I think by now it has earned its place in the lexicon.

Because whether we like to admit it or not, much that was new in the spring now feels pretty darn normal.

Here’s a little challenge: if you think back to mid-March through, say, mid-May, can you identify a few things that were strange and new then, but feel normal now? For me, it was having my husband home all day. I was used to working from home alone while the kids were at school and then working/parenting/chauffeuring in the afternoon until he was home from work. Adjusting to having my co-parent in the same space all day every day was…new. And different. And now? It’s kinda normal.

(For the record, it’s still not ideal. But it does feel normal.)

In the spring I dyed my hair for the first time, and it was a little messy and awkward (though much easier than I expected!). I had to read the instructions before each step, and I felt like I was doing some kind of art project. This weekend, I poured a glass of wine and put on a podcast, shut the bathroom door and touched up my roots for the 6th time since that first experiment in March. It felt indulgent, familiar and…yeah…pretty normal.

Look, I’m not suggesting we have to love the new normal. The old normal remains our North Star in all of this: a future reality where we plan Disney trips and girls weekends, where masks are a distant memory and where I get my hair colored in a salon. But I think we can give ourselves, our kids, and our communities credit for fashioning a new normal from something truly unexpected, unprecedented, and scary.

And it’s a good reminder of one of those universal truths of motherhood: today’s hard will be no big deal one day.

Whatever you’re facing right now that feels hard and awkward, that same thing will one day feel routine and automatic. Remember breastfeeding? How long it took and how many accessories it required in the early days? And how, a few months or a few kids later, how it just sort of happened by rote while you also carried on a whole conversation or read to a toddler or caught up on email? The new hard thing becomes just a thing you do and don’t even have to think about. Like wearing a mask to the grocery store or logging into Zoom school.

So as we start this school year with a whole truckload of newness and firsts, let’s remember those awkward stumbles we had in the spring and the new normals we’ve built since then. Let’s acknowledge the ways we’ve adapted, the ways our kids have adapted, and all the groundwork we’ve laid since March. And let’s put our trust in the fact that, no matter how hard it feels today, we will fashion a normal from this newness once again.

Photo by Jukan Tateisi on Unsplash 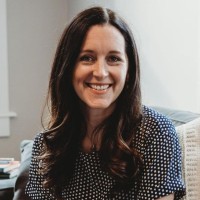 « 7 Ways We’re Saving Money This Fall: Episode 277
More Than Mom: COVID Made Us Do It (Weird Ways We’ve Changed Since March) »