Three years ago this summer I sent a listener question into Meagan and Sarah asking them how they approach discussing LGBTQ+ topics with their children. In hindsight, this was a bit of an unfair question, given that it was socially-loaded and quite non-specific. But what did they do with it? They answered it. On the show. They may have answered the question imperfectly (because nobody does this perfectly), but as a queer mom, their willingness to be uncomfortable meant a lot to me.

When it comes to LGBTQ+ issues, the fact is, none of us (not even me) will get it right every time. Not with each other, and certainly not with our kids. But it’s important that we keep showing up and having those conversations anyway, and that’s why I’ve put together this list of resources that can help. Because while Pride Month has certainly become rainbow-washed (i.e., when a brand uses rainbow colors in their marketing to suggest support of the LGBTQ+ community without doing much of substance to actually support the community), when we keep talking to each other with kindness, humility, vulnerability, inclusiveness, and love, we can carry forward year-round the tenets that define both the heart of Pride Month and The Mom Hour: Love and support for all.

LGBTQ+ Resources For Parents (And Anyone Who Wants To Learn!)

You may have landed on this post for a variety of reasons. Maybe you have a transgender or queer kid. Maybe you think you do. Maybe you are a family member, friend, or ally of the queer community wishing to learn more. Or maybe you are on your own journey of gender and sexuality exploration. No matter why you’re here, I am grateful for it and hope you will find this resource list to be a good starting point for your learning.

Since 1973, PFLAG has served as a national organization aimed at providing education and support for parents, friends, families, and allies of LGBTQ+ individuals. With over 400 local chapters around the United States, its positive impact on communities is felt far and wide. PFLAG is also the creator of one of the most extensive and digestible Glossary of LGBTQ+ Terms.

Founded in 2014, the Mama Bears Private Facebook Group is comprised of a group of moms with LGBTQ+ children. It is a safe online space for moms to discuss challenges, victories, and life as it relates to being the parent of an LGBTQ+ kid. Mama bears can also volunteer to stand in as a supportive figure for LGBTQ+ youth without supportive home environments.

GLSEN is a national organization striving to create safer and inclusive school spaces for LGBTQ+ youth. They are the force behind several annual school campaigns – such as Solidarity Week and Day of Silence – that bring more awareness to the needs of LGBTQ+ youth in school.

It Gets Better Project

With the goal to inspire and encourage LGBTQ+ youth across the globe, the It Gets Better Project has been giving youth hope since 2010. With a catalog of over 60,000 videos sharing a variety of LGBTQ+ Personal Stories, It Gets Better gives hope not only to LGBTQ+ youth but to their family, friends, and allies.

Established in 1998 in response to a gap in accessible suicide prevention for LGBTQ+ youth, the Trevor Project aims to provide help for LGBTQ+ youth considering harming themselves. Expanding off the original toll free lifeline, The Trevor Project now provides 24/7 – 365 days a year access to a counselor through phone, video chat, text messaging, or online chat. The Trevor Project also conducts an Annual Survey LGBTQ+ Youth Mental Health which sheds light on the continued challenges faced by youth today.

Sometimes the best learning and experience comes right from the mouths of LGBTQ+ individuals themselves. Below you will find two reputable creators on Instagram who have massively improved my knowledge across a variety of LGBTQ+ issues.

Schuyler Bailar @pinkmantaray is the first trans NCAA Division 1 men’s athlete who educates on a variety of transgender topics through an intersectional lens. 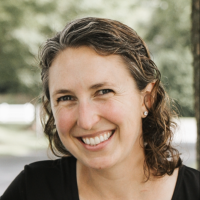 Jayme and her wife Amanda live in a suburb just outside of Raleigh, North Carolina, with their son and daughter. Before her motherhood journey began in 2018, Jayme worked as a Registered Nurse and has since transitioned to being a full-time stay-at-home mom of two kiddos and three fur babies. When able, she loves baking, hiking, and sipping (hot!) coffee on the porch – no matter the time of year.

« Getting Outdoors With Kids: Voices 75 With Jayme Sherrod & Jennifer Carroll
Glad I Did / Wish I’d Done: Tech And Devices: Episode 368 »

In Episode 399 we talked about using social media

Do you have budgeting goals or financial dreams fo